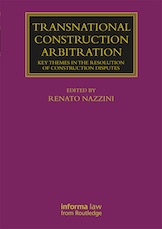 Fenwick Elliott Partner Professor Nicholas Gould has written a chapter on ‘DABs and Adjudication in an International Context’ for the publication Transnational Construction Arbitration.

Transnational Construction Arbitration addresses topical issues in the field of dispute resolution in construction contracts from an international perspective. The book covers the role of arbitral institutions, arbitration and dispute resolution clauses, expert evidence, dispute adjudication boards and emergency arbitrator procedures, investment arbitration and the enforcement of arbitral awards. These topics are addressed by leading experts in the field, thus providing an insightful analysis that should be of interest for practitioners and academics alike.

You can purchase a copy here:
https://www.routledge.com/Transnational-Construction-Arbitration-Key-The... 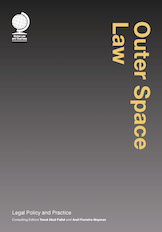 Partner at Fenwick Elliott, Professor Nicholas Gould has written a chapter on dispute resolution in the publication Outer Space Law: Legal Policy and Practice released in October 2017. This chapter relates to satellites, space hardware and cross border issues.  International treaties are considered along with the Outer Space Arbitration Rules produced by the Permanent Court of Arbitration and based on the 2010 UNCITRAL Model Rules.

The book discusses the political relevance of outer space which continues to be recognised by nations, particularly as the strategic benefit of Earth observation from outer space remains an important national security tool. Furthermore, the distinction between the military and non-military uses of space is becoming increasingly blurred, resulting in potential conflict between nations in order to protect their space assets.

The current outer space treaties are to a large degree outdated and unable to deal with legal issues arising out of the military and commercial use of outer space, which will lead to an increase in legal issues related to outer space. This book covers the key issues relevant to the space sector, with an emphasis on the practical application of those issues.

You can purchase a copy here:
http://www.globelawandbusiness.com/books/outer-space-law-legal-policy-and-practice

Fenwick Elliott’s Dictionary of Construction Terms offers clear and concise explanations of the most commonly encountered legal and technical terms, phrases and abbreviations used throughout the construction industry.

It will save you valuable time when searching for an authoritative explanation of a frequently used term. It will become a practical reference for construction lawyers, practitioners and students, as well as those in related industries including planning, property and insurance.

Why you should buy this book:

You can order the dictionary by clicking on the link below: 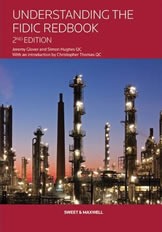 Understanding the FIDIC Red Book, the 2nd edition of which was published in January 2012, provides a clause-by-clause commentary of the FIDIC Red Book contract offering expert guidance on interpretation. Each clause is reproduced in full followed by a bullet point summary of key features plus additional commentary on the clause’s operation, including points of interest and consideration of recent case law.

The book also helps you solve problems frequently encountered in practice in relation to various clauses and compares the new contract with previous versions of the FIDIC Red Book and other widely used standard contracts. This includes an in-depth review of the Multilateral Development Bank Harmonised edition (or Pink Book) 2010 together with an explanation of how the Pink Book differs from the standard FIDIC Red Book contract.

The publication has been jointly written by Jeremy Glover and Simon Hughes QC of Keating chambers. Christopher Thomas QC, also of Keating Chambers, wrote the introduction and a foreword has been provided by Mr. Justice Ramsey.